Teutans is a brand of battling app toys from IMC.

Every collectable Teutans toy figure comes with a code that unlocks the character in the Teutans app. Three Teutan Heroes are already unlocked whilst others can be unlocked by placing the figures on tablet or smartphone screen. 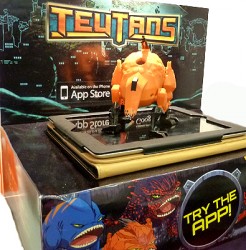 The Teutans app is available as a free download from the App Store or Google Play.

Teutan Heroes do battle with an enemy robot force known as the Badulls.

Teutans can fire spring-loaded projectiles, either balls or missiles, through their mouths at their Badulls enemies. Teutans stand 13cm high and come with a firing range net and two Badulls.

The Teutans Badulls toys are available separately in blind bags with two Badulls figures supplied plus ten bullets and two missiles. There are 12 different variants of the Badulls enemies with names like Z8, Z9, X9 and X8. Each has detachable parts.

Not only do Teutans toys unlock characters online in the app game, but their articulation and projectile firing capabilities make them great fun offline too. 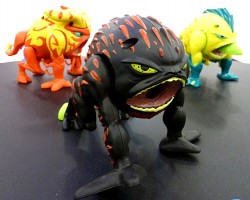