The Grossery Gang is a new line of garbage-themed toys from Aussie company Moose Toys.

The basic premise behind the range can be summed up by its tag line ‘Your Shoppin’s Gone Rotten!’ It’s basically mini figures in the shape of food items that have gone bad.

Launching in the UK in Autumn 2016, The Grossery Gang are collectable and swappable plastic figures that you can also play with. The initial range includes 150 different ‘Grosseries’. The standard Grosseries figures are the Common and Rare ones. The Ultra Rares are the mouldy ones, the Special Edition are sticky, and the Limited Edition figures have a metallic finish.

Grossery Gang figures have their own themes, such as Choc Bar, or Corny Chips and Crunchos which are based on potato chips gone very, very bad. These are available in 10 and 12 figure multipacks.

Look out also for Grossery Gang playsets where you can display all your gross food. Hero set is the Yucky Mart with two exclusive figures.

Also available is the Mushy Slushie Machine with enticing flavours such as Rotten Raspberry.

Step aside parents, Grossery Gang toys are about to make a smash and grab raid on your kids’ pocket money. 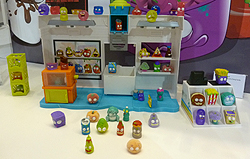