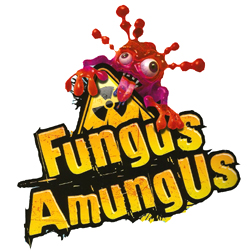 Vivid, the UK’s biggest toy company, is headquartered in Guildford. Since its launch in 1993 the company has designed some of the best-loved craze toys including Moshi Monsters and Puppy in my Pocket.

This colourful new line of figures, known as ‘Funguys’, debuts in the UK in January 2016 with a big launch including press and TV advertising, as well as a dedicated website and webisode series.

Small, collectable figures, Fungus Amungus are sold in blind bags and multi-packs. The twin-packs are called Petri Dish packs, and the five-packs are known as Vac Packs with rare super-mouldy and toxic figures. Each collectable figure is made of soft, squishy plastic that sticks to anything, and each one has its own distinctively gross personality. Fungus Amungus toys come with a collector’s leaflet and will be released in several waves beginning with Series 1, or ‘Batch 1’. In total there are over 100 to collect.

Fungus Amungus toys are quite disgusting enough to become the next new mega-grossing collectable playground craze.