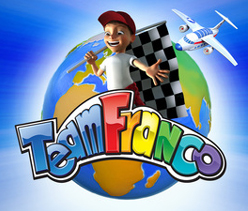 Though currently still on the starting grid, Team Franco toys are one of the most exciting new toy brands around.

In September 2012 Classic Media, a division of US media giant Dreamworks Animation, snapped up the rights to Team Franco. Team Franco had previously won the MIP award for its incredible licensing and merchandising potential.

Team Franco is an action-packed CGI series by Formula Fun Entertainment about Franco whose toy racing cars explode into life. Team Franco cars compete in the Raceworld for the Continent Cup.

Team Franco is simply overflowing with toy licensing opportunites. Naturally, there are a large cast of Team Franco cars such as Zoomi, RBee, Rossie, Ram, Reggie, Hiro, Max, Benita and Brains to collect. Then there’s Arnie the Airplane, Susie the Safety Car and of course Franco himself.

Driven by very strong animation, this property has such wide global appeal that doubtless one of the very largest multinational toy companies will soon secure the worldwide rights to Team Franco toys.