Abadas toys based on the popular new CBeebies show Abadas will hopefully be released soon.

The Abadas rights are managed by Cloudbabies producer HoHo Entertainment. The show is a co-production by the BBC, RTE and S4C.

Through Abadas, preschool fans can enjoy learning new words through play. Every time narrator Ben delves into his magical pop-up book, his friends Ela the fox, Hari the hippo and Seren the bat are there to play.

HoHo Entertainment are currently working to get toy companies on board.

Abadas has strong viewing figures and HoHo have seen a big response from social media too.

With luck, a bright new range of Abadas toys including plush, figures and playsets will be in development soon. 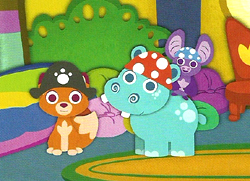