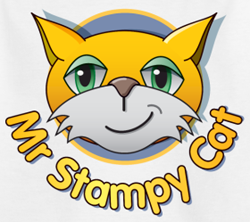 Mr Stampy Cat, also known as Stampylongnose, is the creation of Joseph Garrett. After taking a degree in video production, Garrett began uploading Minecraft videos to Youtube from his bedroom in his parent’s house in Portsmouth.

Playing the cult video game as Stampy Cat, Garrett quickly amassed over 4 million subscribers and currently gets over 30 million hits a week on his Youtube channel. Garrett registered Stampy Cat as a trademark in 2013.

Stampy’s fans are desperate to get their hands on Stampy Cat toys and merchandise. The first product available was the Stampy Cat t-shirt with the familiar yellow smiling cat logo, at which time Garrett announced that there would be “more designs and products coming soon”.

Since then Stampy Cat mugs, badges, tote bags and themed teddy bears have been added to Garrett’s official Spreadshirt site.

However, in the apparent absence of official toys, fans have taken to making custom versions of Stampy Cat in both plush and plastic which turn up on crafting site Etsy and on Ebay.

Stampy’s army of Youtube fans can only hope that a major toy company can license the brand and finally release a line of official Stampy Cat toys.