Series 1 Zomlings toys launched in October 2013 in the UK with a total of over 100 variants to look out for. There are initially 48 different wacky mini plastic figures to collect, all found in two distinct colours.

In addition, and to make things really interesting, there are 6 Ultra Rare Silver Zomlings and 3 Limited Edition Gold Zomlings!

The crazy creatures are made up of seven different Zomling neighbourhoods each with their own featured characters. Recreate the entire town including the Zomling Zoo, Freaky Farm and Wacky Waters.

The figures are sold with their own little houses. Each Zomling House comes with two figures and retails at the pocket money price of £2.50.

Zomlings toys are distributed in the UK by Hampshire-based Esdevium Games. Further toys are planned for release next year.

Magic Box have an incredible track record of success with craze toys and Zomlings have all the ingredients to be yet another playground hit. 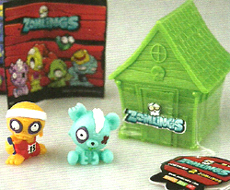