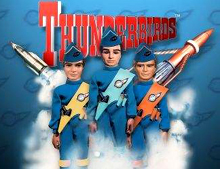 Thunderbirds Are Go toys are on their way thanks to UK toy company Vivid Imaginations.

Gerry Anderson’s original Thunderbirds show was first broadcast in 1965 and remains a cult sci-fi hit to this day, with classic toys such as the iconic Thunderbird 2 die-cast by Dinky Toys highly collectable.

From a secret base on Tracy Island, International Rescue headed by Jeff Tracy and sons Scott, Virgil, Alan, Gordon and John pilot their Thunderbird rockets to avert twenty first century disasters and sabotage.

Vivid will launch the all new line of Thunderbirds toys in the UK with a subsequent roll out to international markets. The company are set to release a comprehensive range of Thunderbirds Are Go vehicles, figures, die-cast models, play sets and role play toys.

Five, four, three, two, one; the Thunderbirds Are Go Toys countdown has begun…