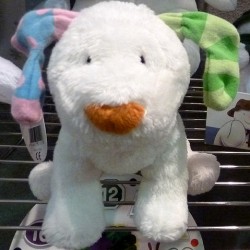 The Snowdog toy from the movie ‘The Snowman and the Snowdog’ is made by Rainbow Designs.

The Snowman was originally a picture book by Raymond Briggs from 1978 that became a classic Christmas film. Fans have long been able to buy cuddly Snowman toys in a range of sizes.

The long-awaited sequel ‘The Snowman and the Snowdog’ premiered in 2012 followed by the release of the DVD.

Now at last Rainbow are releasing The Snowdog as a plush cuddly toy from Autumn 2013.

The Snowdog is a property of Penguin-owned Snowman Enterprises Ltd. Snowdog toys are made under license by Hampshire-based gift and toy specialist Rainbow Designs Ltd.

The adorable Snowdog soft toy stands around 14cm tall, is made in very soft plush and has the trademark coloured socks for ears.

Rainbow’s cute Snow Dog toy is certain to be near the top of many Xmas lists this year. 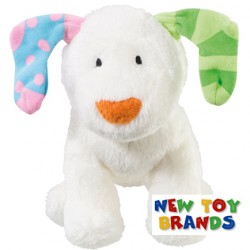