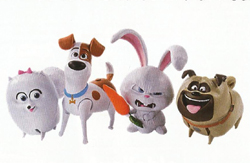 Spin Master are the master toy partner for The Secret Life of Pets.

The Secret Life of Pets is produced by Illumination Entertainment and released by Universal Studios in mid-2016.

The US company will be releasing a range of toys based on the movie from 2016. Heavily TV promoted, Spin Master anticipate that their Walking Talking Pet figures will be the biggest sellers. Chief amongst these is Walking Pet Max, the film’s hero terrier from a Manhattan apartment.

Toys set for release include a variety of figures, both plush and plastic, and premium plush. All the pet characters are poseable and have different expressions, sounds and phrases from the movie.

The Secret Life of Pets toys were set to be revealed to the trade at the New York Toy Fair and will be available to consumers to coincide with the release of the movie.