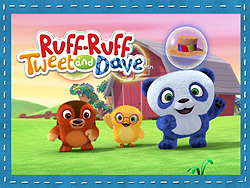 Ruff-Ruff, Tweet and Dave toys are derived from the smash-hit pre-school CBeebies show.

Posh Paws International are releasing a new line of Ruff-Ruff, Tweet and Dave toys in Autumn 2015 under a licensing agreement with Rocket Licensing. The agreement covers plush Ruff-Ruff toys, talking plush and beanies.

The Ruff-Ruff, Tweet and Dave show debuted in the UK in April 2015 on CBeebies. The animated series is written and produced by Tony Collingwood in conjunction with Sparky Animation, Bejuba Entertainment and Sprout. Series one features 52 eleven minute episodes. Central to each episode are adventure, exploration, and interactive multiple choice games.

A new master toy licensee for plastic figures, vehicles and playsets should be announced soon. This would include toys of the Spinagain, Bubblecopter and the Rollypods, as well as figures of Ruff-Ruff, Tweet, Dave and Hatty.