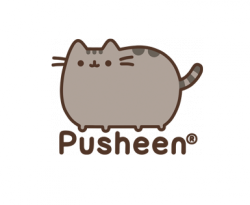 Pusheen toys are based on the cute cat who stars in the popular web comic.

Pusheen was originally created in 2010 as a character in a web comic entitled ‘Everyday Cute’ by artists Clare Belton and Andrew Duff. Since then Pusheen has featured in a dedicated blog, a book called ‘I Am Pusheen the Cat’ and has a huge social media presence on Facebook, Twitter and Tumblr.

In fact, cute and amusing memes featuring the loveable Pusheen feature on blogs and sites all over the web.

The idea behind the felicitous feline came from Belton’s very own cat, a rescued grey tabby known as ‘puisin’, Irish for kitten.

There have long been many unofficial bootleg toys around, but now New Jersey based Gund Toys, the oldest plush manufacturer in America, is releasing a brand new official collection of Pusheen merchandise.

Launching in 2015 plush Pusheen toys will be available in a variety of sizes from small (15cm) to medium (30.5cm) feature plush. As well as her standard grey with black eyes and whiskers, she can also be found with additional pink, purple and green pastel colours and decorated with an embroidered heart motif.

Available characters include Pusheen with a chocolate chip cookie, with a pink iced donut and holding an ice cream cone. Look out also for the special ‘Pusheenicorn’ feature plush toy.

Pusheen toys are certain to delight and capture the hearts of fans worldwide. 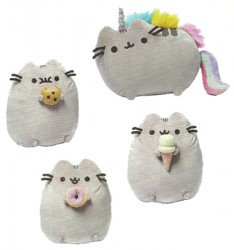