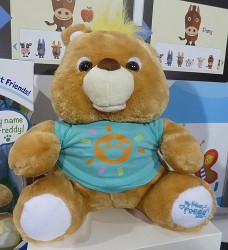 The My Friend Teddy toy is the smart new interactive bear from Vivid.

Having had a huge hit with My Friend Cayla, a plush teddy bear version is the perfect complement for Guildford-based Vivid’s growing smart toy stable.

My Friend Teddy connects with a smartphone or tablet wirelessly via Bluetooth.

When you enter a few family names into the app, as if by magic My Friend Teddy begins to include them in the things he says!

This super smart bear learns as he goes along and interacts with loads of activities found in the app.