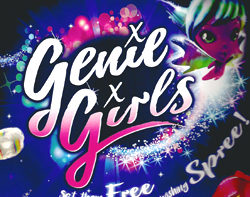 Magically, Genie Girls dolls change colour before your eyes when you warm them just by the touch of a finger. UK toymaker Vivid say the new toy line, available from January 2017, will be their biggest launch to date with over 100 Genie Girls to collect in Series one alone. Central to the launch will be a dedicated YouTube channel featuring reviews, unboxings and specially created webisodes.

A clever backstory sees the Genie Girls released from their bottles and given the ability to grant a wish along with their magical colour change power. Look out for classic and rare glitter and neon Genie Girls figures.

Alongside the singles, fans can pick up the twinpack Genie in a Bottle sets which include stackable genie bottle containers. The 5 and 10 figure packs are said to contain the rarest Genie Girls.

Also available as part of the range are Vivid’s special Genie Girl Glo Lantern which enhances the dolls with a magical glow, and the Wish Granter musical orb for storing your Genies.

A magical idea, Genie Girls are set to become the girls’ pocket money collectable of 2017.