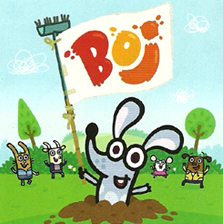 Boj is the creation of David Hodgson of UK animation studio Pesky Productions. The show debuted on CBeebies in May 2014.

Downloadable interactive Boj books are already available, mobile games are in development and a master toy partner is currently being sought.

Top of every fans list must be a toy Boj bilby. Boj toys are sure to be a huge success when they are released.