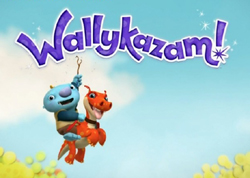 This delightful show is created by New York based writer Adam Peltzman whose credits, amongst several other successful children’s series, include The Backyardigans. Wallykazam! first aired on Nickelodeon in Spring 2014.

Hero character Wally Trollman, an inquisitive young troll, can actually turns words into real objects with the help of his magic stick and best pal Norville, a pet dragon. Other main characters include Gina Giant, Ogre Doug, Stan of the Swamp, Bobgoblin and Libby Light Sprite.

Wallykazam! is hugely entertaining but also helps pre-schoolers get to grips with words, their sounds and the alphabet.

There is as yet no master toy partner for Wallykazam toys.

Kids and parents alike are wishing they could magic up a range of plush Wallykazam toys as well as action figures, playsets and games. Top of every young fans wishlist are Wally Trollman plush and a Norville the Dragon toy.