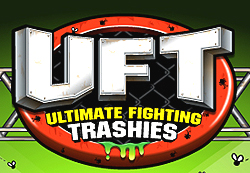 UFT toys or Ultimate Fighting Trashies are the next evolution of Moose’s Trash Pack brand.

UFT toys and UFT figures are now set to litter the planet’s retail space. UFT figures are made of a slightly less squishy plastic than their Trashie predecessors. They also incorporate a battle element; select a UFT Trashie fighter, load it into the Spin Bin and wind it up to battle other UFTs.

The UFT Character Pack has 12 exclusive Fighting Trashies. The UFT Spin Bin Launcher Pack features an exclusive UFT Trashie. Each UFT team has its own colour of Spin Bin.

UFT Trashies put a new spin on a not-so-old toy proving that in the toy trade, as elsewhere, where there’s muck there’s brass.