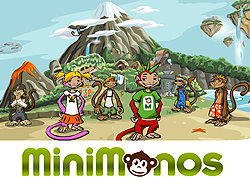 MiniMonos toys based on the incredibly popular online game MiniMonos are not scheduled for release … yet.

However, MiniMonos founder Melissa Clark-Reynolds is actively looking to recruit licensees to release a brand new range of MiniMonos toys. She’s already teamed up with the BBC to help promote the brand.

Storming past the one million registered user mark in early 2012, MiniMonos.com continues to expand. MiniMonos fans get the chance to style their own MiniMono monkey and treehouse.

Social media devotees, mostly aged between 8 and 12, venture through the MiniMonos world competing in a variety of eco-challenges as they go. The eco-values of the site will hopefully be reflected in a range of largely ethically produced toys.