Lite Brix toys are a new light up construction toy range from Cra-Z-Art.

Many will be more familiar with New Jersey-based Cra-Z-Art as a designer of art and stationery products.

Lite Brix are compatible with other ranges of construction bricks, such as Lego. Build up the sets with interconnecting circuitry and plug in the battery power unit to illuminate the colour-changing LEDs inside the models.

Lego themselves released light up bricks as far back as 1957, and these days there are several competing brands all with slightly different offerings.

The good thing about Lite Brix toys is you can use the power unit and light up bricks to light up any construction brick creation you can imagine. 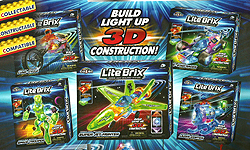