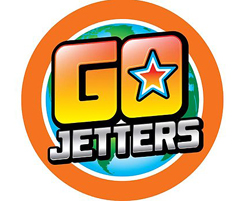 Fisher Price, a division of Mattel, has been appointed master toy partner for Go Jetters toys. From autumn 2016, Fisher Price are releasing a range of toys including plush and feature plush Go Jetters figures. They are also releasing plastic figure and playsets. Look out for Go Jetters spaceships and vehicles. The toys, aimed mainly at pre-schoolers, debut in the UK and are set for a global rollout.

Go Jetters began life as a webisode on the CBeebies kids website. Two series were subsequently commissioned in 2015 for airing on the CBeebies channel. The show is a co-production of CBeebies and BBC Worldwide.

The main characters in the show, Xuli, Kyan, Lars and Foz, explore the planet and learn about its geography with the aid of Ubercorn, a funky disco unicorn. Meanwhile they must watch out for arch-villain Grandmaster Glitch who is always messing up the world’s landmarks. Each character has his or her own speciality; Xuli is the pilot, Kyan is great at gymnastics, Lars can fix anything and Foz is super-smart.

Go Jetters toys are set to really take off all around the world!