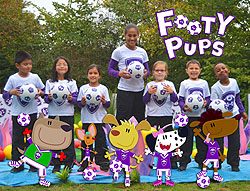 The Footy Pups are an adorable team of five animated puppies who love to play football. Each episode sees the Footy Pups learn new tricks and football skills. The lovable canine five-a-side team take on other animal teams including the hippos, the ducks and the cheetahs.

Hosted by England and Arsenal’s Rachel Yankey, Footy Pups is produced by Dot to Dot Productions and debuted on CBeebies in Spring 2015.

There is as yet no master toy partner for Footy Pups. The show lends itself to a range of action figures and playsets. In addition, the show may well inspire a range of Footy Pups themed football merchandise, toys and games.

Footy Pups toys are set to be top of the league with parents and kids alike.