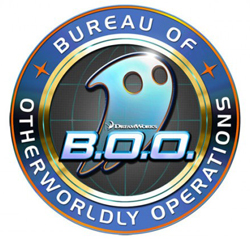 B.O.O.: Bureau of Otherworldly Operations is made by DreamWorks Animations and screens worldwide from Summer 2015.

B.O.O agents have a top secret weapon – they are themselves ghosts! Hero agent Jackson Moss and partner Watts must track down and defeat the super-evil Drake and his ghastly army of ghosts.

B.O.O toys are made under license by monster US toy corporation Hasbro. Hasbro plan to release merchandise across the whole spectrum of toy categories.

Hasbro are releasing a range of Bureau of Otherworldly Operations toys and games including plush, playsets and action figures. The company are also set to release interactive role play toys and gadgets based around the movie’s ghost hunting theme.

Competitors will be in for a fright when they see the sheer scale of Hasbro’s Bureau of Otherworldly Operations toys.