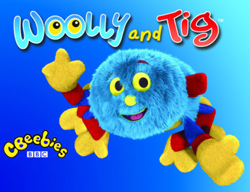 Woolly and Tig was created by Brian Jameson, co-produced by Tattiemoon and managed by Brands with Influence. It stars a brave young explorer, Tig, and her helpful animated spider toy Woolly.

Golden Bear’s license covers a wide range of toys. Fans are set to be wowed by plush Wooly and Tig toys as well as figures, playsets, and electronic talking RC Woolly and Tigs.

The Scampering Remote Control Woolly toy really does move like Woolly from the show and features a very simple to use RC unit in the shape of a colourful steering wheel.

Woolly the spider toys offer tremendous fun and play value, with electronic interactive Woolly and cuddly plush Woolly spider both an absolute must.

The success of this brand will quickly creep up on retailers as Woolly and Tig toys are snapped up by ardent fans.