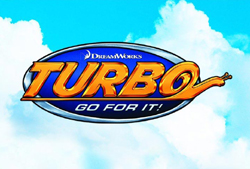 Turbo is also being made into an animated TV series with worldwide broadcast appeal. Look out for Turbo games and a new Turbo app.

A common or garden snail, Turbo wishes he could be the fastest in the world. The problem is, he wants to prove himself against his Indy 500 racing car heroes.

The Turbo brand is extremely ‘toyetic’ with the IndyCar track and cars making an ideal Turbo Playset with collectable Turbo cars. Turbo the snail makes an ideal interactive plush toy.

News on which major toy company will be the first of many licensees for Turbo toys is to be announced soon.