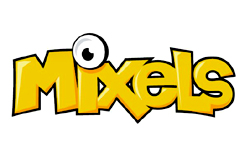 Mixels toys are the product of a multi-platform brand collaboration between kids broadcasting champion Cartoon Network and toy giant Lego.

Mixels derive from differing colour-coded elements including electricity, fire and earth. For example, Volectro is from the Electroids, Flain from the Infernites, and Seismo from the Cragsters. Each character has unique powers.

As the name suggests, Mixels figures can be mixed and rebuilt with their interchangeable parts, just as they mix and combine on screen and in the new Mixels App. Lego plan three series of collectable Mixels figures with an initial total of 27 figures to collect.

Cartoon Network will be responsible for producing the animated and digital Mixels content, and Lego will develop and extend the Mixels toy range.