A new pocket money collectable, Star Monsters toys could be the next big thing for Magic Box International.

Over the years Magic Box have coined several new craze toys and become a specialist in the field. Star Monsters toys have all the necessary elements to be a winner.

The back story of the brand is that every Star Monster is formed from a falling star that has landed in a particular place and taken on its unique powers and characteristics.

Star Monsters come in four colourways with white the ‘essential’ variant. The base of each figure displays its origins, power and rarity. High values and rarity are the most desirable and have the greatest power when it comes to game play, as detailed in the Star Monsters Album.

Star Monsters toys launch in the UK with a massive press and TV advertising campaign as well as a dedicated website. 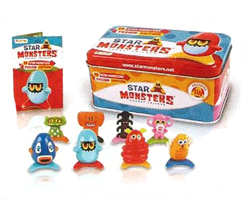