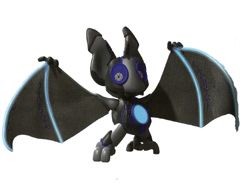 Nocto the bat is a new interactive electronic toy from Vivid Imaginations.

Vivid, formed in 1993 by former Matchbox employees, design all their toys in the UK.

Nocto has an incredible 50 different interactive features and multiple sound and light effects. He also has six distinct moods, all recognisable as each mood has its own movement, sounds, expressions and lights.

Nocto comes with four interactive games including Fruit Bat Machine. Switch to protect mode to have Nocto guard your room. Nocto even dances to music with dynamic lights and sounds and mechanical wing movements.

This is one toy bat with real ‘batitude’. Forever a teenager, Nocto will astonish you with his hissy fits and tantrums.

Though it will drive parents batty, kids will love Vivid’s Nocto toy.