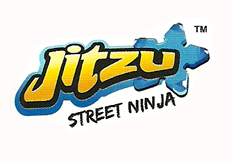 Jitzu toys are the brand new pocket-money collectables from The In Thing.

Jitzu ninja stars are found in four styles that can all be connected together. Jitzu game pieces can also be used to compete in games of skill based on accuracy of throwing Jitzu stars, similar to Bungees, can be thrown or bounced into battle.

With a huge number of combinations, Jitzu is also highly collectable. Jitzu stars are from five different Ninja Schools. The five schools feature eleven characters with different combinations leading to over 100 Jitzus to collect.

First released at retail from January 2013, the Jitzu Street Ninja line will be strongly backed with both a TV advertising campaign and as promotional giveaways in kids magazines.

With the twin elements of battle and collectability combined with its pocket-money pricing, The In Thing’s Jitzu toys should hit the retail playgroung running.