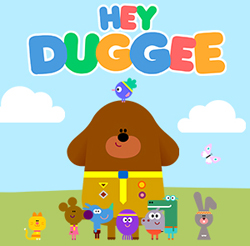 The Hey Duggee show debuted on the CBeebies channel. The show was created by Grant Orchard of London animators Studio AKA.

Loveable dog Duggee is the leader of The Squirrel Club who meet at Duggee’s Clubhouse. The main Squirrel Club members are Tag the rhino, Betty the octopus, Roly the hippo, Happy the crocodile and Norrie the mouse. The club have adventures and solve problems to achieve Squirrel Club badges.

Hey Duggee will surely translate into a great fun range of plush toys as well as role play toys based around the shows ethos of problem solving and goal attainment.

Golden Bear’s new range of Hey Duggee toys should be available at retail sometime in 2015.