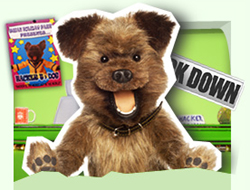 Hacker T Dog toys are based on the popular puppet presenter Hacker the Dog.

Hacker T Dog is a regular co-presenter on the CBBC channel and has his own show Hacker Time. Hacker T Dog loves singing and interviewing celebrities.

Hacker the dog was born to Mrs T Dog in Wigan in 2005 and has a half-brother called Dodge T Dog. Hacker is currently operated by puppet master and comedian Phil Fletcher.

At one time Hacker T Dog worked as a yellow coat at Wigan Holiday Park, now the pedigree border terrier puppet has his own agent, Brands With Influence, who are licensing Hacker T Dog plush toys, puppets and games.

Hacker fans have been crying out for a Hacker T Dog toy puppet or soft toy for ages and at long last they are set to get their reward.