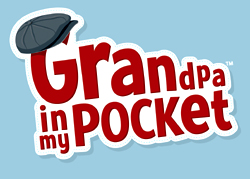 Grandpa in my Pocket toys made by Corgi Toys will be released from Autumn 2013.

Corgi, a brand of Hornby Toys, have secured the worldwide master toy licencees for Grandpa in my Pocket toys from Adastra Creative.

The hit TV show, starring James Bolam as Grandpa, is in its third series on the BBC’s CBeebies channel. Grandpa only has to put on his incredible Shrinking Cap to shrink so small he fits into grandson Jason Mason’s pocket.

Corgi are to release an exciting range of Grandpa in my Pocket toys including playsets, figures and vehicles.

Expect Grandpa in my Pocket figures of Grandpa with Shrinking Cap and Beowulf the dog, Jason and Jemima, and not forgetting Mum and Dad.

A Corgi toy Grandpa in my Pocket Sunnysands Playset of Jason’s House with exclusive figures should also be pencilled in.

Corgi are releasing both plastic and die-cast vehicles. Campo the Camper Van and Grandpa’s Car (actually Jason’s toy car) are obvious toy choices as well as Jason’s bi-plane and toy train. An RC Jason’s Car will also be released, driven by a Grandpa figure and featuring light and sound effects from the show.