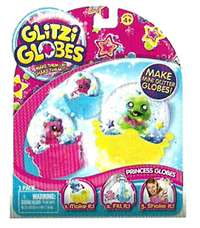 Glitzi Globes is a new brand from Flair aimed at girls aged four and over.

Surrey-based Flair have been creating and distributing toys since 1999.

With this creative new toy you can easily make your own glitter globes. The starter pack includes three Glitzi Globes with different themes, such as Princess Globes. Simply make them up, fill with glitter, and shake!

Glitzi Globes can also be used to make funky jewellery or as unique pencil toppers!

Initially released with themes to suit girls, it’s not confirmed when boys will get a look in with their own Glitzi Globes toys.