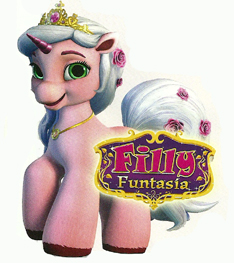 The toys are made under licence by master toy licensee Simba Dickie.

The original Filly brand, owned by Dracco, has already sold tens of millions of Filly unicorn toys across Europe and is currently the best selling toy line in Germany.

Filly Funtasia is an animated cartoon comprising an initial 26 thirty-minute episodes first airing in 2014. In the wonderful Kingdom of Funtasia, a beautiful young Filly Unicorn named Rose arrives for her first day at Magic School. What follows are her adventures in education, friendship and everything else that being so new to such an art would bring!

The new Filly Funtasia toys come in a wide range of bright colours with fabulous Unicorn Accessories (though some may wish to buy others from other retailers) and even incorporate realistic tiaras with Swarovski Elements crystals. Simba Dickie are also releasing a range of Funtasia playsets to go along with the new line of collectable Filly figures.