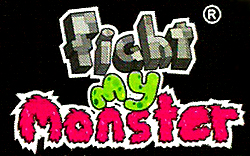 Licensed Fight My Monster toys are on the way!

Fight My Monster is a fast-growing free online game in which you can create you own monster cards. Collect, buy and trade your cards to battle your way through the game.

Fight My Monster, targeted at boys aged 8 to 14, has experienced phenomenal growth since its launch in January 2011. The brand was created by London-based entrepreneur and father of four boys Dominic Williams.

Dimensional Branding Group, the company behind the brand, recently announced a Fight My Monster merchandise deal with Striker Entertainment.

The master toy licensee for the innovative online social gaming brand Fight My Monster has yet to be announced.

When released in the real world, Fight My Monster toys should quickly battle to the upper reaches of retailer’s bestseller charts.