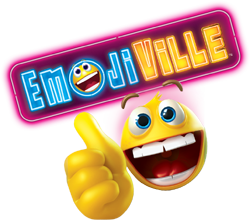 Emojiville toys based on the Emojiville cartoon are made by Jakks Pacific.

Saban Brands and Jakks Pacific have partnered before for the iconic Power Rangers franchise. Emojiville began as a web series in 2014 and debuts as an animated TV show in 2015.

Emojis are the little characterful emoticons used online and in texts. Emojiville is the town where the Emoji smiley friends live and where their adventures take place.

Jakks Pacific are licensed to produce a wide range of Emoji toys from pocket money collectables to plush, figures and playsets. The company make use of the very latest interactive toy technology.

Emojiville toys are set to put a big smile on a lot of faces worldwide.