Dino Mundi toys are a new range of dinosaur toys from Toys Talk.

Dino Mundi is a world inspired by Jurassic adventures with safari jeeps, tracks and electronic dinosaurs.

The hero toy of the range is the Dino Mundi Track Set featuring 200 separate pieces of interconnecting track from which up to eight different playsets can be constructed. The playset includes a bridge in the shape of a triceratops that lights up and roars as the battery-powered safari jeep passes through it.

Kids can download the Dino Mundi app to bring their dinosaurs to life. Open the app and point a smartphone or tablet at any of the dinosaur cards included to see dinosaurs roar to life on screen right in front of you. You can feed the dinosaurs in the app game and battle with them too.

Available separately are a range of six touch-sensitive Dino Mundi dinosaurs that emit light and sound effects when picked up.

Dino Mundi toys really help to bring the Jurassic period back to life with a roar. 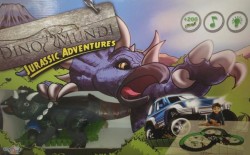