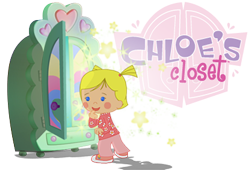 Chloe’s Closet toys based on the incredibly popular Chloe’s Closet kids animated TV show will see their initial launch towards the end of 2012.

Chloe’s Closet first aired in the UK on CITV followed by Cartoonito. The show is produced by Moonscoop, itself headquartered in France though the show launched first on PBS in America.

The show centres on Chloe and her friends Daniela, Jet, Tara and Mac. Every time a new outfit appears in Chloe’s Closet she is transported on a magical adventure. Chloe is assited by her loveable toys Soggy, Wizz and Lovely Carrot.

Must-have toy in the range is Chloe’s Magical Dress Up Closet. Bring Chloe’s Closet to life by transforming the Chloe figure with the Magical Closet and Chloe outfits supplied. Golden Bear will release a number of ‘Chloe Dress Up Figurines’ to compliment the playset, all with different Dress Up Chloe Doll themes, such as, Gardening Chloe, Princess Chloe and Doctor Tara.