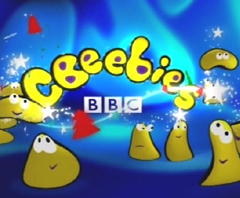 CBeebies toys derive from the identity and branding of the BBC’s CBeebies channel.

The CBeebies channel is a public service television channel dedicated to entertaining and informing pre-school and young audiences. Since the launch of CBeebies in 2012 it has garnered many film and TV awards.

The merchandising arm of the British Broadcasting Corporation, BBC Worldwide, have appointed UK preschool toy specialist Golden Bear as its master licensee. Golden Bear have recently struck licensed toy deals for CBeebies shows Woolly and Tig, Something Special and In the Night Garden.

This is the first time that the BBC have licensed toy rights for the CBeebies channel, and possibly the first time ever that a kids TV channel has had its own dedicated range of toys.

The CBeebies branding features the popular CBeebies Bugs that Golden Bear are bringing to life in toy form. In keeping with the channel, CBeebies toys are set to be both fun and educational. As well as interactive toys, Plush CBeebies Bugs and character figures and playsets will be welcomed by kids and parents alike.

CBeebies toys are available at retail from Autumn 2014.