The Appgear Mysterious Raygun has 12 parts which can be assembled in different configurations that when scanned with a smart device unlock different elements of a virtual world. 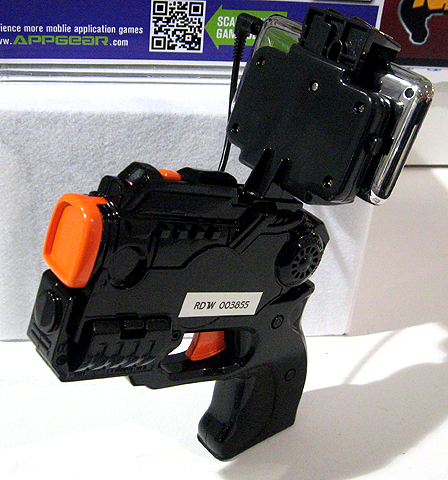 In App Commander a smart device can be slotted into and connected up to a ‘real’ gun for a combination of ‘real’ life and virtual shoot-em up gaming. App Commander takes advantage of the smart device’s camera to make virtual enemies ‘appear’ in the real world.

Akodomon comes with a small interactive monster figure, cage and playmarker. The object of the game is to raise your little Akodomon monster, such as the baby iRex, by unlocking areas of the virtual Appgear Akodomon world.

Appgear Zombie Burbz has 2″ collectable alien Zombie Burbz figures that can be interactively moved across a virtual play board on the screen of a smart device.

The games can be downloaded free with the Appgear toys which are intended for the pocket-money price bracket.

Bringing bricks and mortar toy retailing ever closer to the virtual world of online gaming, Appgear toys are sure to have a very strong appeal.