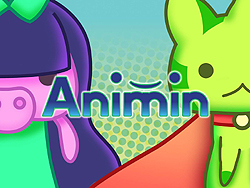 The animin app is available as a free download for iOS and Android smartphones and tablets. Extra characters can be unlocked by purchasing Animin packs.

Interactive Animin pets evolve when you feed them, give them medicine and play mini-games. Animin characters include Kelsey, a girlie pig, T-Bo, a large-eared elephantine creature, and Pi with his distinctive red cape.

What’s more, the animin app also incorporates instant messaging and voice recognition as well as the ability to play games with friends online.

Animin, currently in beta mode, rolls out with a full launch in the second half of 2014.

Whilst the team concentrate on developing the animin digital world, fans will be hoping it’s not too long before Animin toys occupy retail as well as digital space.